Double Down with Cilantro and Coriander

Have you ever enjoyed a fresh seafood ceviche or homemade salsa made from ingredients straight out of the garden? If not, you haven't lived. Cilantro ( Coriandrum sativum) and its seeds are popular seasonings in recipes on every continent.

Cilantro is an acquired taste for some. If you've tried it and wrinkled your nose at its flavor, don't be afraid to give it another chance. The flavor varies depending on preparation and pairing.

In Europe, cilantro is often called coriander, but we reserve the latter for the plant's seeds. Coriander seeds are actually the plant's fruit: as with its close relative  caraway, each fruit contains two seed "embryos".

Coriander and cilantro let you double down on your gardening efforts; each has its own flavor and use in the kitchen.

As with other members of the carrot family, cilantro stems are grooved and the plant's tiny white, pink or even red flowers bloom from umbrella-shaped clusters called  umbels.

The cilantro plant bears two types of leaves. Its compound pinnate leaves grow directly from the stem's top, and broader, less elaborate base leaves branch out from below.

Often confused with  Italian flat-leaf parsley ( Petroselinum crispum), cilantro's leaves are more aromatic and tender, with a lighter green hue. Italian parsley leaves are darker, tougher, and glossier, with little odor at all.

Cilantro grows in dense, lacy bunches, 18-24 inches high and as much as a foot across.

Cilantro has a mild parsley flavor. The taste reminds some of the sweet scent of fresh-cut grass on a late-spring morning.

Cilantro is high in saponins, which can lend the leaves a mild soapy flavor in more mature greens. The taste is stronger in the uppermost leaves, which should be pinched off when preparing cilantro in the kitchen.

Coriander is a  spice with a floral, citrusy flavor, enhanced when it's lightly roasted to release its oils. It's sometimes used as a flavoring in gin and other liquors, but if you begin your explorations with coriander at the liquor store, don't overdo it; you'll miss out on a planet-wide buffet of recipes in which this spice plays a major role.

Cilantro, while most commonly associated with Mexican dishes, is native to western Asia, southern Europe, and North Africa. Archaeologists have found coriander in Egyptian tombs and ancient Chinese burials, but the  oldest archeological evidence of coriander's cultural use was discovered in the Nahal Hemar cave in Israel, and the Torah mentions that fruit and plants were used by Israelites during the exodus. It's referred to as "gad" in the Bible, and cilantro and coriander continue to be a fixture in Middle Eastern cultural cuisine to this day.

It seems everyone wants to claim ownership of this tender herb. Cilantro is sometimes known as Indian parsley, and it's often used in curries. Have you ever enjoyed Vietnamese fare? That's cilantro in your  phở  or wrapped inside your crisp, crunchy spring rolls.

Cilantro is well-established in New World cultural fare. In Peru and Costa Rica, it's become one of the most widely-used herbs, sometimes interchanged (and confused) with a related plant bearing a similar name and flavor, culantro ( Eryngium foetidum).

How to Grow Cilantro

Cilantro is a cool-season plant that bolts in hot weather. Despite its delicate leaves and stems, established plants can tolerate temperatures as low as 10°F, making it a good candidate for a late-season crop.

In zones 3-8, cilantro does well when planted in the spring. In warmer zones, it's usually planted in the cooling days of early fall. Either way, you can start cilantro indoors to get a head start before the last predicted frost or to protect seedlings from the hottest days of late summer.

Cilantro prefers full sun. In warmer areas, it will tolerate partial shade. Cilantro requires loose, fertile, well-drained soil, especially when planted in high densities. It's not too picky with pH, though it does best between 6.5 and 7.5.

Plant cilantro 1/4" to 1/2" inches deep, about 6" apart in rows 12" wide for seed production.  WorldCrops.org suggests crowding your plantings as densely as 20-30 seeds per linear foot to stave off weed infiltration and allow for easier harvesting of bunched early greens and stems.

Cilantro germinates in 5-7 days, and while it's easily stressed, it can be started indoors 2-4 weeks prior to last frost and transplanted outdoors.

It does well as a container herb or grown in flats, but cilantro requires consistently moist (not wet) soil.

Each fruit includes two plant embryos, and each will germinate independently. As cilantro grows well in high-density cultivation, there's no need to thin plants unless coriander is your intended harvest.

Cilantro grows well with other moisture-loving, cool-season herbs, including  basil,  true spinaches,  watercress, and  mint. It's known to grow well in the shade of established tomatoes, but  fennel and cilantro don't do well together.

Cilantro in its flowering stage attracts beneficial insects such as predatory wasps, hover flies and pollinators.

Cilantro isn't particularly prone to pests or disease, but too much moisture on the leaves can cause fungal issues. Standing water can cause root rot, and cilantro's preferred moist soils and drooping nature provide cover for slugs and snails.

While cilantro needs about 120 days to produce fruit. The stems and leaves taste best roughly five weeks after germination. Cilantro doesn't stand up well to frequent picking, so we recommend successive planting for an ongoing continual harvest.

Since cilantro plants should be harvested in their entirety rather than leaf by leaf, go right on ahead and use the roots as you would the leaves and stems.

Are you letting some of your cilantro plants go to seed? Harvest coriander by uprooting the whole plant and hanging them upside down in a warm, well-ventilated spot. Loosely wrap the flower heads with a fine mesh. When the plant dries, shake the seeds loose from the umbrels.

Cilantro easily reseeds itself, so keep this in mind as you clean up your garden at the end of each season.

Cilantro is best used fresh within a day or two after harvest, but air-dried leaves do have a milder flavor and, if stored in an airtight container in a cool dark place, can provide flavorings for hot soups and stews through the winter.

If you grow your plants for coriander seeds, their high oil content shortens their shelf life. Keep them stored in the refrigerator in a dark, resealable container.

Cilantro and Coriander: It's Good for You

Cilantro and coriander both contain remarkably high levels of dodecenal, a compound proved to kill salmonella bacteria when ingested in high concentrations. Unfortunately, the surface of the plant isn't immune, and salmonella outbreaks due to poor commercial handling practices have earned cilantro and other leafy greens bad press and misplaced blame in recent years.

Cilantro is rich in vitamins and minerals. It's high in iron, potassium, calcium, and magnesium, as well as vitamins A, C, E, and K.

One cup of chopped cilantro greens and stems contain about 8 nutrient-rich calories.

Compounds found in coriander and cilantro are thought to treat the following ailments, though it's prudent to consult with a physician or licensed nutritionist before using concentrated amounts of either for medicinal purposes. In fact, high doses of essential oils made from coriander can cause disorientation or, for a lack of a better term, stupor.

Coriander and cilantro compounds are able to break down fats and prevent further accumulation of lipids. In certain applications, can serve as an antibacterial agent.

Don't want to be bloaty, stinky and overweight? Time to start looking into some delicious recipes!

Cooking with Cilantro and Coriander

This world-renown plant has so many uses in the kitchen, it's easy to find a recipe to suit your taste buds or dietary restrictions. Let's start with dishes featuring cilantro greens:

One Skillet Creamy Lime and Cilantro Chicken: It's a mouthful to say, but what a delicious mouthful it is. Serve it with rice, pasta, or veggies, and substitute low-fat dairy or yogurt for heavy cream if the sauce is a bit too much for your diet.

Cilantro Lime Rice: Pair this side with Mexican dishes or Asian fare. It's fantastic with simple grilled or seafood recipes, and worth the steps you'll take to do it right.

Cilantro Chicken Curry with Yogurt: This is a great curry recipe with step-by-step instructions and photos from  A Little Bit of Spice by bloggers Jane and Cherian, a pair of self-proclaimed "kitchen geeks" who emigrated to the San Francisco Bay Area from the Indian state of Kerala. They explore a variety of recipes but seem to do a good job of introducing their western friends and readers to their native food culture.

Classic Ceviche: Ceviche's origins are contested to this day, but the seafood salad is popular Latin American fare, particularly along the South American Caribbean coast or in Baja coastal villages. This is a great basic ceviche recipe, though some might squint at the use of olives. Skip 'em, or pick 'em out; the main idea is to experiment with your favorite seafood.

Coriander Salmon: Served hot or cold, this is a simple, easy-to-make recipe for a healthy, flavorful meal.

Oven Fries with Coriander Seeds: Time to dig out those potatoes and trim off some thyme leaves. Here's a way to spice up your burger night without getting third-degree burns!

Start Your Culinary Adventures with Us

Seed Needs can help you add to your spice collection and herb garden with more than 500 varieties of garden vegetable, fruit, and ornamental seeds. We're a family-run business with a promise to provide fresh, non-GMO seed stock that we inspect and hand-package ourselves.

Our fresh seeds have high germination rates. If you can manage to get your coriander seeds past the kitchen and into the soil, you'll have a successful crop of seedlings as soon as spring kicks in! 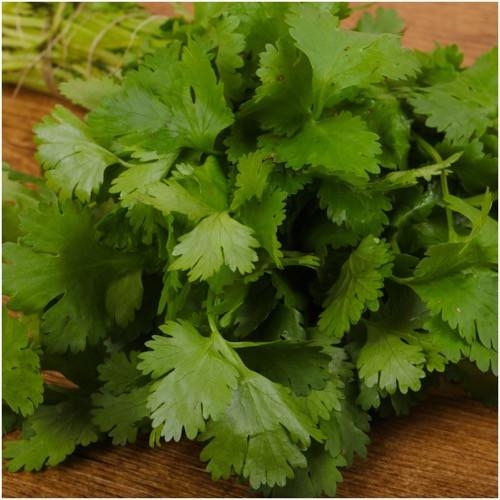 There's nothing like adding freshly cut herbs to a culinary dish. Cilantro is grown as an annual herb, serving it's purpose for one growing season. The plants themselves will grow to a mature height of roughly 24 to 30 inches tall and about 12 inches wide.